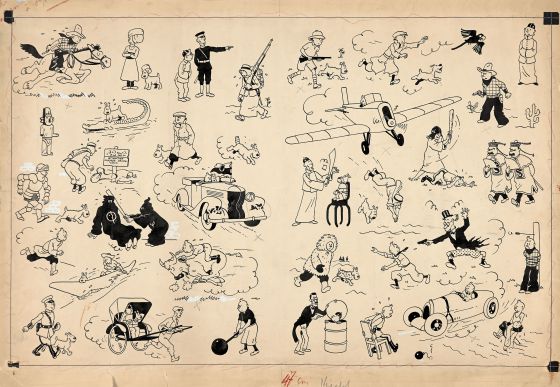 Original Tintin Comic Strip Fetches 2 Million Euros at Auction | Medindia http://www.medindia.net/news/original-tintin-comic-strip-fetches-2-million-euros-at-auction-136571-1.htm#ixzz32v3OE6AW
The piece, dating from 1937 and signed by the creator Herge, went to an American collector after 15 minutes of furious bidding at the Artcurial auction in Paris.

Experts said the sum, 2.5 million euros ($3.4 million) including fees, or 2.1 million euros without, reflects the new enthusiasm for cartoon items, which have seen prices soar in a decade.

The piece sold Saturday is a double page ink drawing created by the Belgian artist for the inside cover of the Tintin adventures published between 1937 and 1958, featuring images drawn from the various albums.

Tintin appears with his dog Snowy in different situations, as a cowboy, an explorer, a knight in shining armour, on a horse or in the desert.

The previously highest-selling comic piece, also by Herge -- the cover for "Tintin in America" created in 1932 -- sold for 1.3 million euros to a "Tintinophile" last June.

"I thought only these inside cover pages could beat the record set by 'Tintin in America' in 2012. This has happened today with this exceptional drawing," said Artcurial's cartoon expert Eric Leroy.

"This new world record confirms the place of cartoon art as a major art form," he said.

The gallery owner Daniel Maghen, who also works with comic art, estimates that prices for cartoon art have multiplied tenfold in the last 10 years.

The sale on Saturday was entirely dedicated to the Belgian designer and his blonde-haired creation. A further sale, featuring the work of other cartoonists, will take place Sunday.

SELFIE: A new word in the dictionary

Did you know that the dictionary is growing? Even selfie is included now.

How are new words chosen for the dictionary? Merriam-Webster relies on a group of observers. They track down word usage in everything from newspapers to soup can labels. Three or four senior editors make the final cut.

Selfie, that thing with the smartphone that Ellen DeGeneres did at the Academy Awards, has now spawned shelfies. Those are photos people put up on social media to show off their books and how they have arranged them.

And we now have stealthies, those sneaky little phone pictures masquerading as selfies. That's when the taker actually snaps what's behind him or her instead.

Paleontologists in Argentina say they recently discovered fossils belonging to the largest dinosaur on record. During its lifetime, the new species of titanosaur is believed to have stood 65-feet-tall, was more than 130-feet-long, and weighed 77 tons (155,000 pounds).
"Given the size of these bones, which surpass any of the previously known giant animals, the new dinosaur is the largest animal known that walked on Earth," researchers Dr. Jose Luis Carballido and Dr. Diego Pol told the BBC.
Its enormous length was spread out across a long neck and tail, with a relatively small skull. To put the newly discovered titanosaur’s enormous size in context, a T-Rex weighed about 7 tons.
The fossils were first spotted by a local farm worker in 2011 and were fully excavated by a team from the Museum of Paleontology Egidio Feruglio led by Carballido and Pol. The fossils, taken from seven different titanosaurs, were described as being in “remarkable condition.”
"Standing with its neck up, it was about 20m high -- equal to a seven-story building." Carballido said.
Despite its overwhelming size, the giant titanosaur, belonging to the larger sauropod group of dinosaurs, is believed to have been a herbivore, roaming through the forests of the Cretaceous Period about 100 million years ago.
“This is a true paleontological treasure,” Carbailido said in a statement.
Carballido and Pol said in choosing a name for the newly discovered species, the researchers want to honor both the historic size of the fossils but also the farming community that first stumbled upon the remains.
"It will be named describing its magnificence and in honor to both the region and the farm owners who alerted us about the discovery," they said.
This was the second major titanosaur find in 2014. Back in January, a team of Pennsylvania scientists uncovered fossils belonging to the Yongjinglong datangi during an excavation in China.
Carbaillido and Pol say the 150 fossils were found in close proximity to other species, including carnivores. They say the unusual placement means the dinosaurs likely died in a draught, either due to dehydration or after getting stuck in the mud.
"It's like two semi trucks, one after another, and the equivalent of more than 14 African elephants together in weight," Carballido said. "Such dimensions put the focus on the extent to which these animals may have grown. It's a real paleontological treasure," he added.

.Paleontologists Jose Luis Carballido (L) and Ruben Cuneo pose
next to the bones of a dinosaur at a farm in La Flecha. 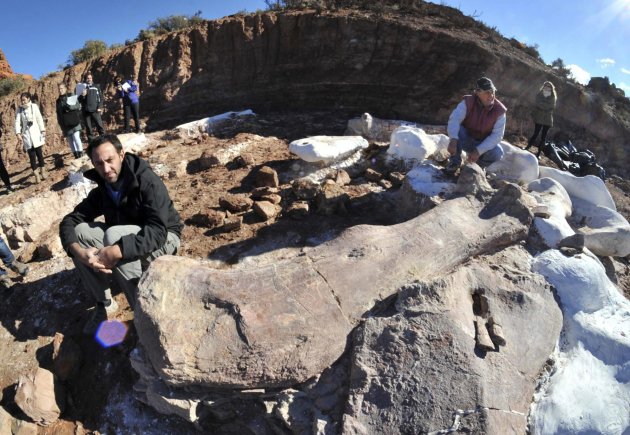 EXAMS ARE COMING!!!
No comments:
Etiquetas: TO STUDY ENGLISH


This is a link giving information to people from the USA who travel to Spain.
Read it. It's in English but, come on!!, you can understand it. It's really interesting . Do you agree? yes, no,...

Let me know your comments.

For all of you, 3rd level children, who are working very hard to present your project to the class.
And play some interesting games in this webpage
http://www.kidsastronomy.com/fun/index.htm

Smarter, cheaper and greener ways to get around town

From car sharing to power walking, there have never been more methods of mobility.Mobile technology is making it easier to access new alternative means of transport in Spain’s cities

Ever-more costly gasoline, gridlocked traffic, global warming and, above all, the need to save money are just a few of the harsh realities facing the Spanish automobile sector, which is going through its worst slump since 1986. Young people are no longer interested in owning a car, especially if they live in a large city.
But that, of course, doesn’t mean they still don’t need to get around. One answer could be car sharing. BlaBlaCar is one of the most popular car-sharing sites in Europe. The company has grown three times faster in Spain than it has in the other 12 countries in which it operates. 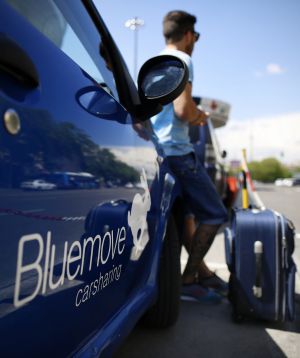 Bluemove rents its cars by the hour. / samuel sánchez
Another new phenomenon in Spain is car rentals by the hour, and Bluemove is the country’s pioneer. The firm says it has grown threefold since 2012. It offers drivers access to a vehicle in a number of central locations in Madrid. Customers sign up via a website, and are then sent a swipe card. They can then reserve through the site.

Another way of sharing costs and reducing emissions is through the JoinUp Taxi service, created by Alberto López and Elena Peyró. “We thought the most intelligent way to move around a big city is jointly,” says López. They launched the application 18 months ago, and are now present in most of Spain’s major cities. More than 1,000 taxis have signed up, and around 17,000 people have downloaded the app. Young people in particular use the service because they find it fun, says López: “Once you’ve tried it you’ll use the service again; it’s particularly useful for journeys to train stations and airports.”
Madrid City Hall has finally decided to offer its own rental bikes, a service that will be available from June. In the meantime, companies such as Mobeo have filled the gap. “We are a showroom for bikes designed for urban transport,” says Álvaro Ventura, one of the company’s founders. 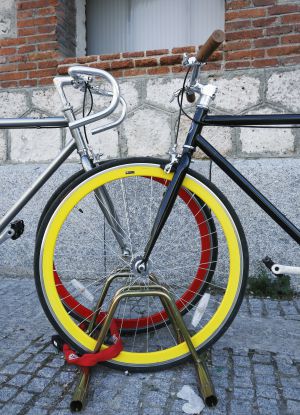 Mobeo offers customers advice on which bike will suit them best. / kike para
As well as renting bikes by the hour, day, or week, Mobeo also advises buyers on what kind of two-wheeled transport best suits them, depending on where they live, if they have a lift, how often they use the bike, or whether comfort is a factor. “People buy heavy bikes with lots of accessories that just make them more likely to be stolen. We offer people what they really need,” says Ventura.
The most popular models are folding bikes, which are easy to take on the bus or metro. Mobeo recommends people combine biking with public transport. It also sells electric bikes: around 60 percent of its customers are aged over 65.

No comments:
Etiquetas: DAILY NEWS
If you want to find out how to sign your name in British Sign Language you can access the following link:

No comments:
Etiquetas: TO STUDY ENGLISH

Here you are the information I gave you in class. It might be useful.
http://www.abc.es/local-galicia-inventos-calculadora
http://www/tvg/a-carta/actualizad@s
http://cedlgdevigoebisbarra.blogspot outros-inventores-galegos.html
http://diariodepontevedra.galiciae.com/nova/
And REMEMBER...  DEADLINE, 9th May
No comments:
Etiquetas: CONTESTS
Newer Posts Older Posts Home
Subscribe to: Posts (Atom)